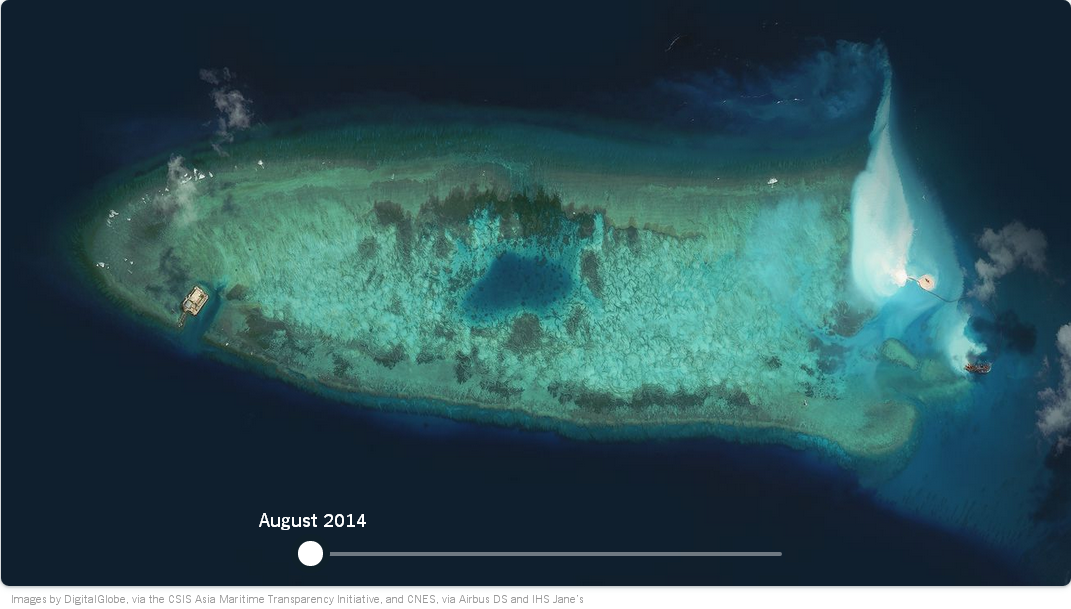 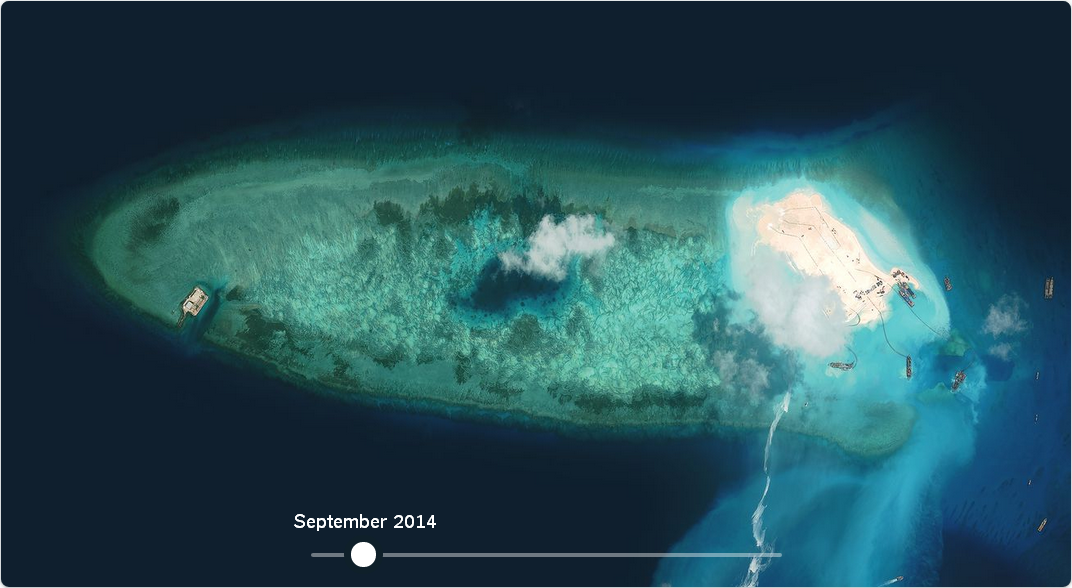 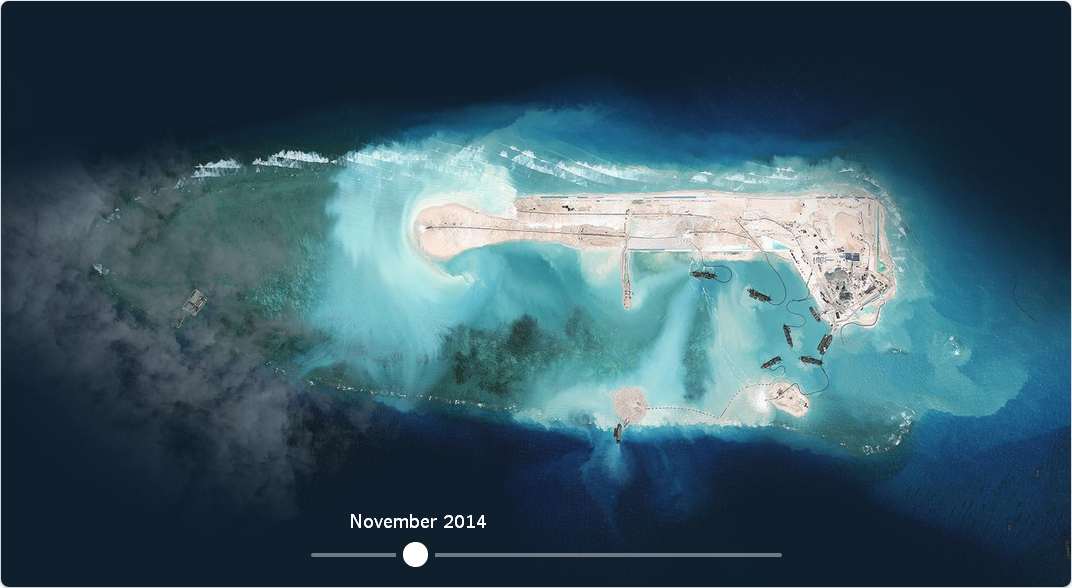 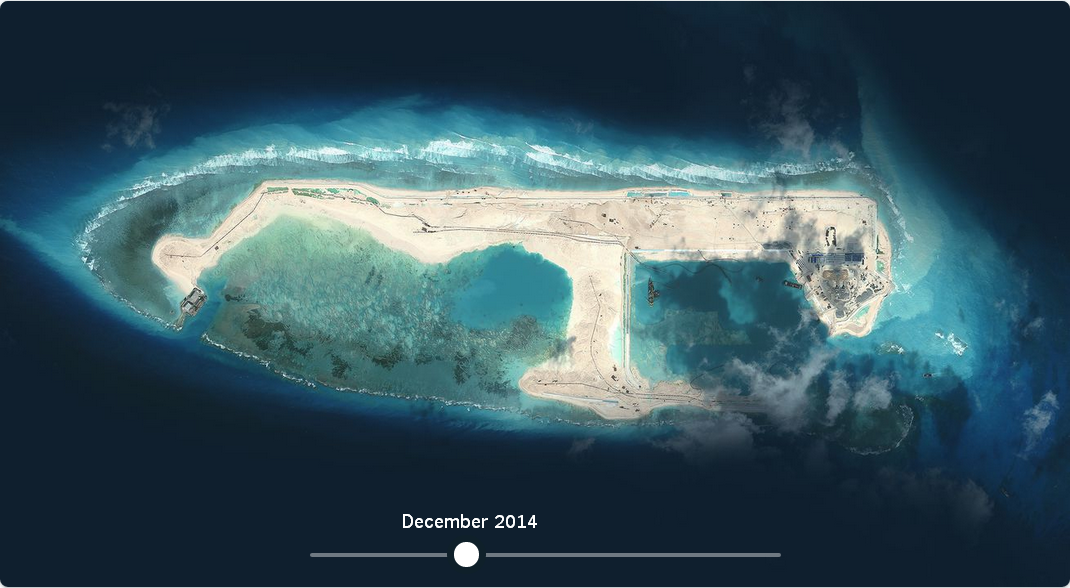 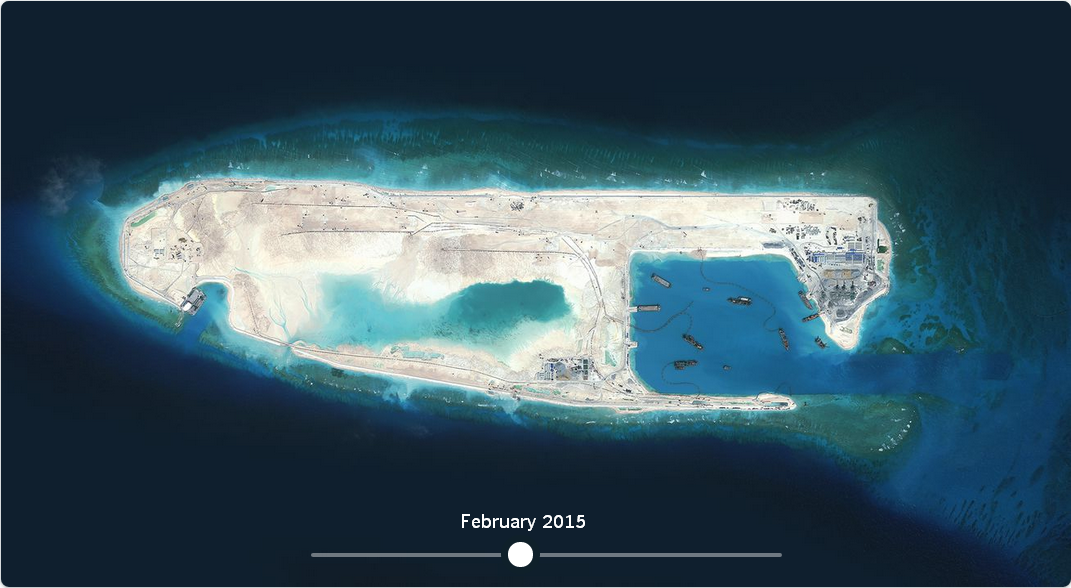 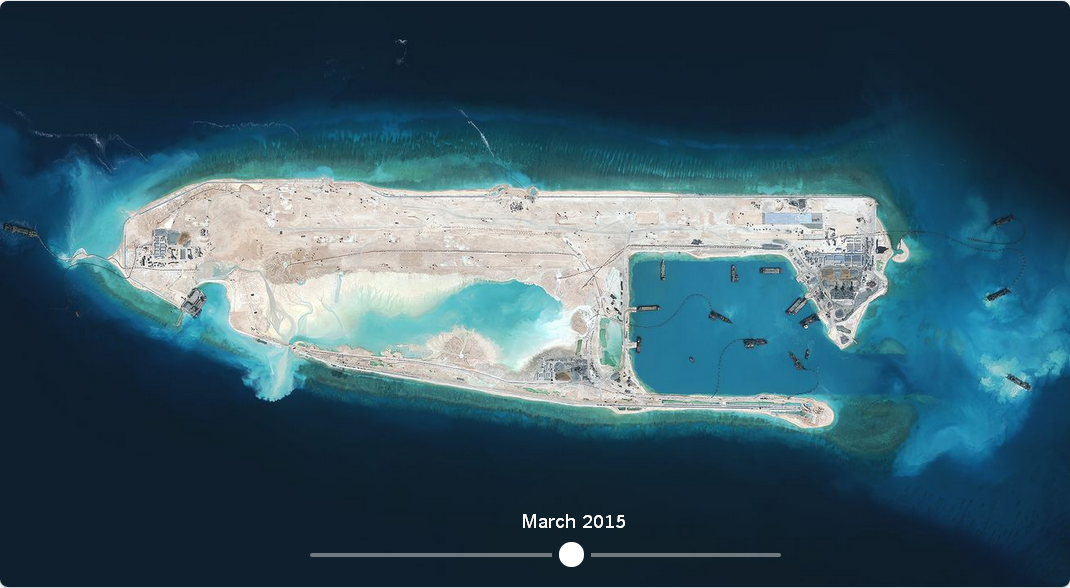 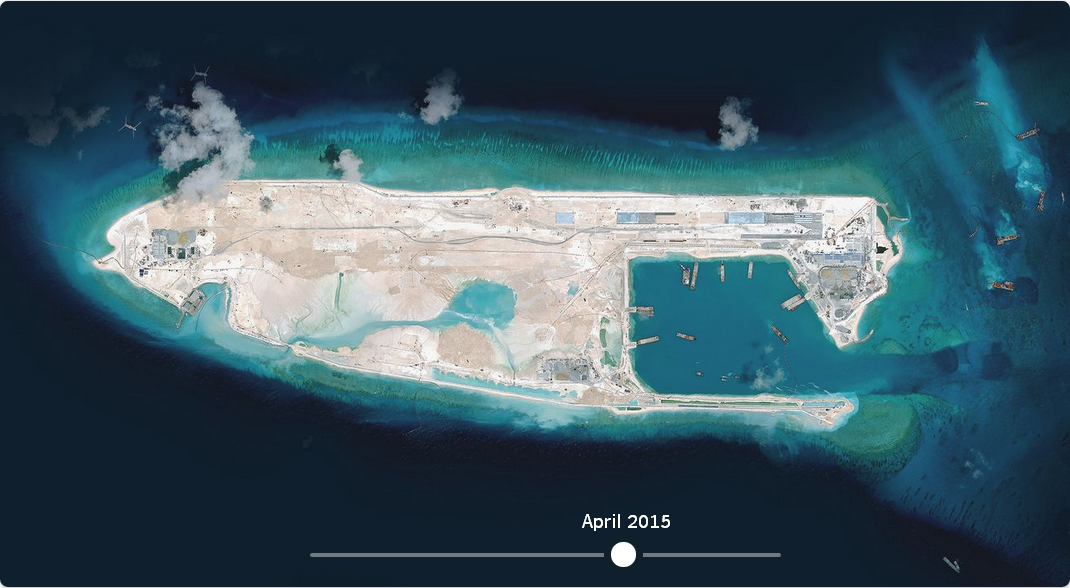 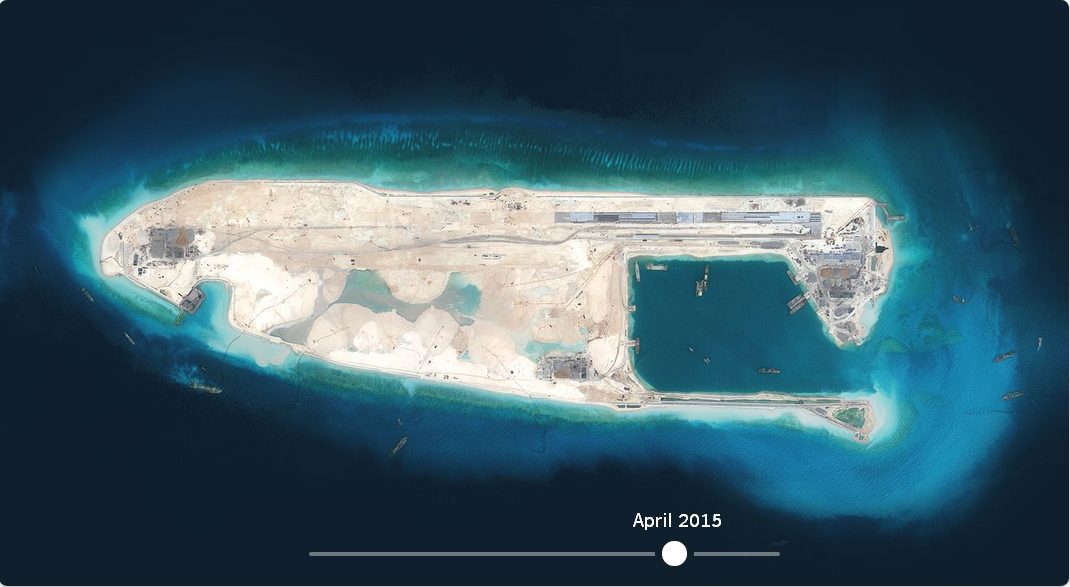 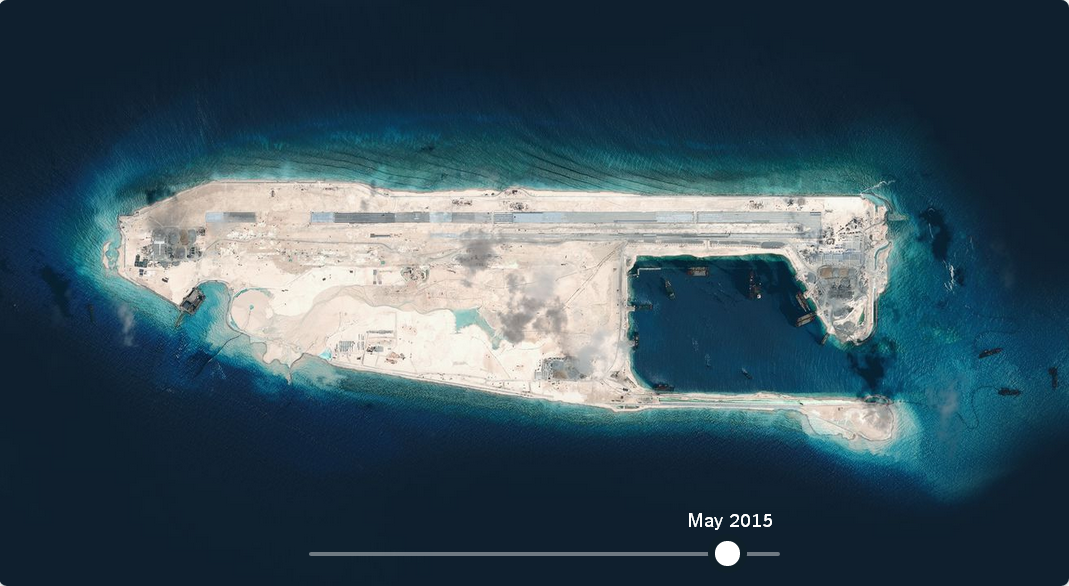 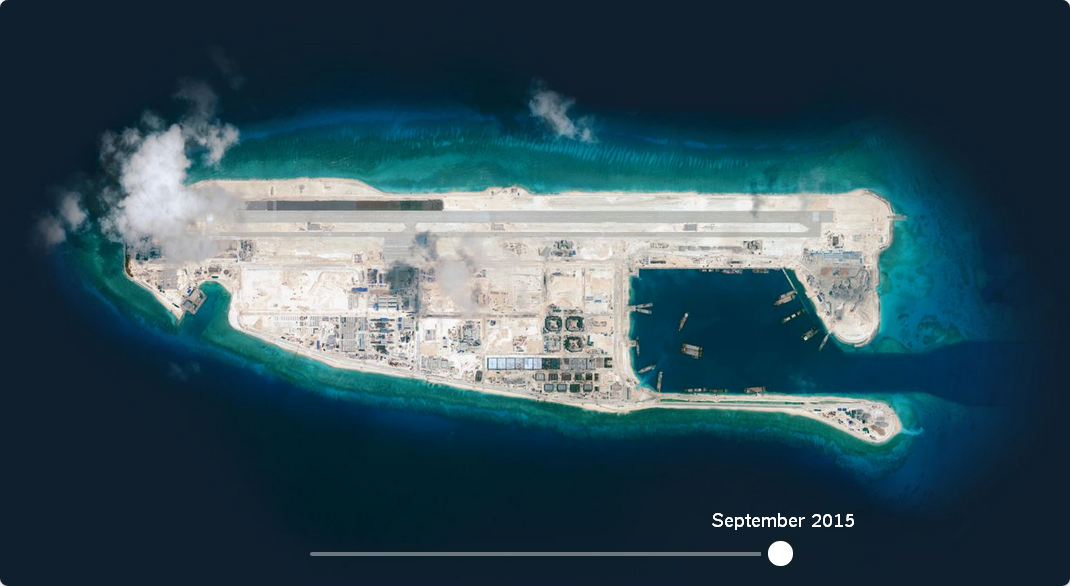 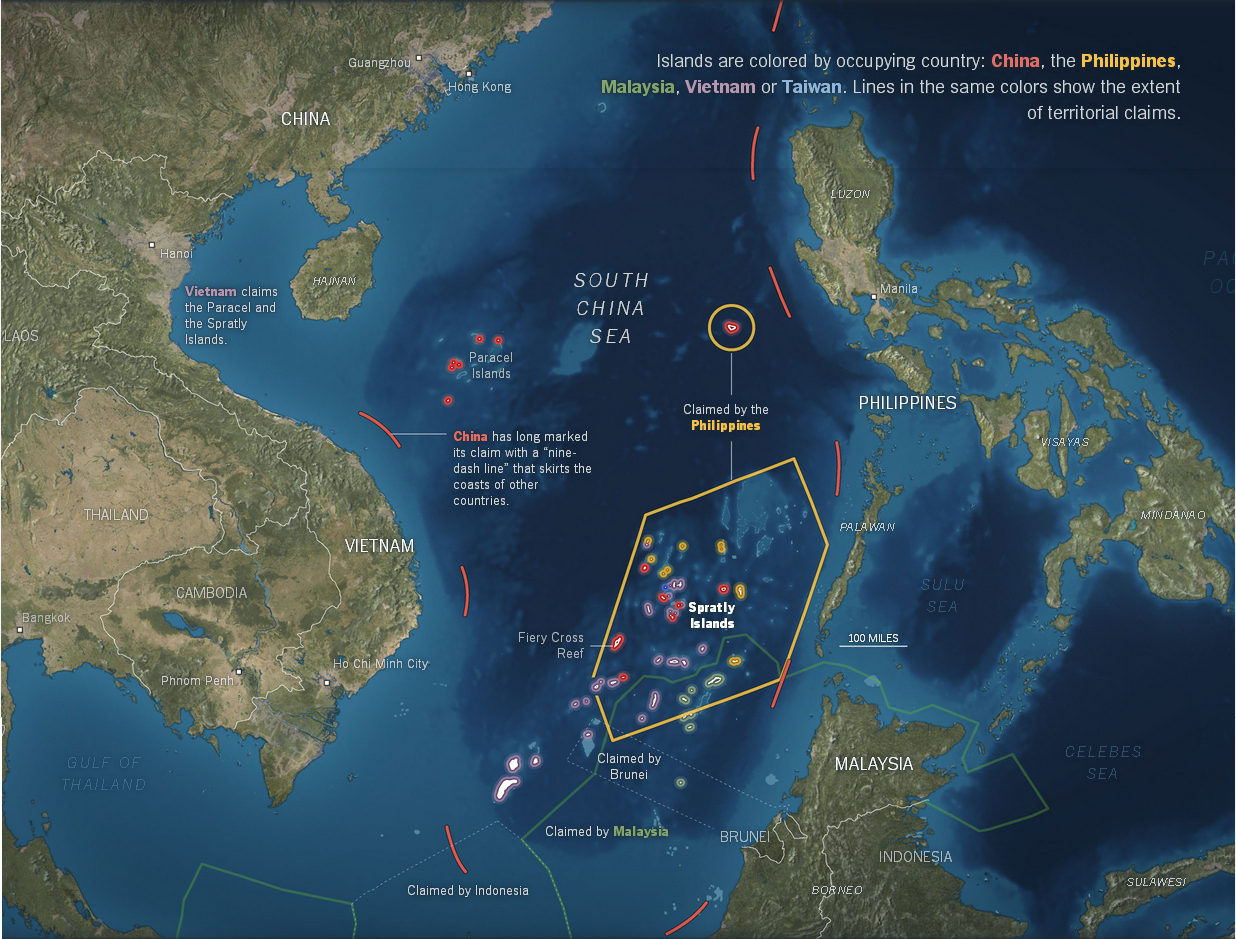 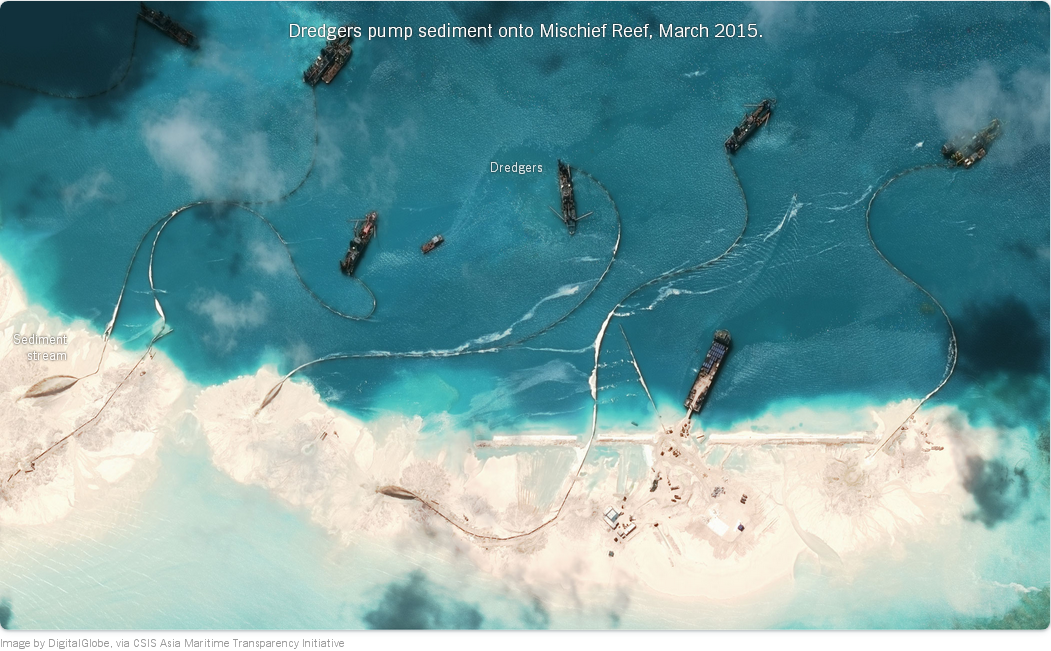 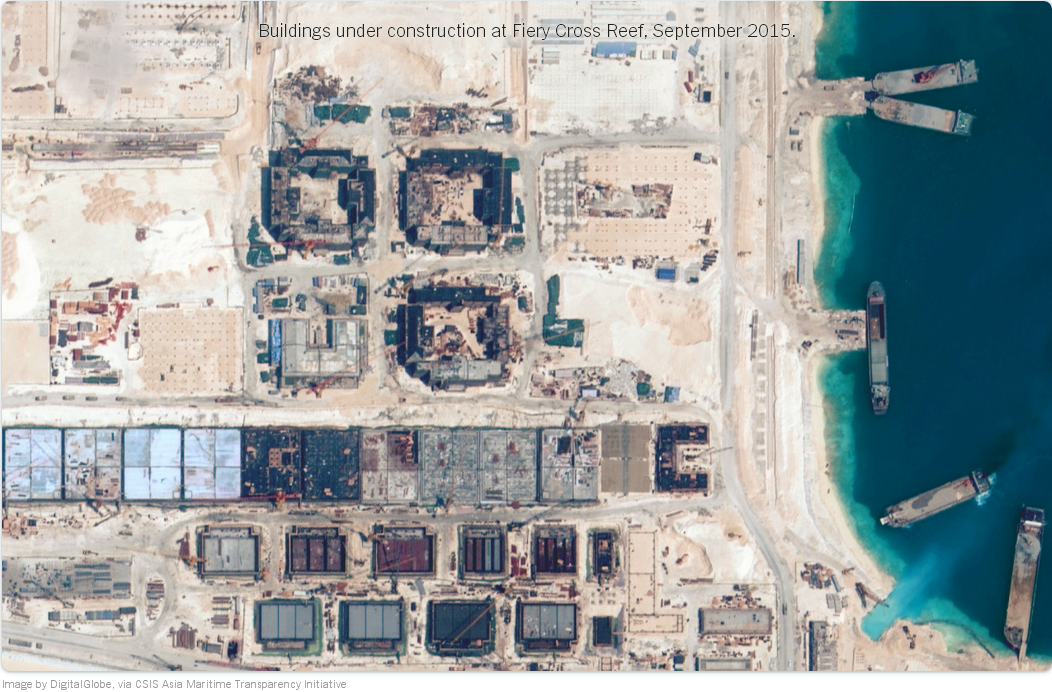 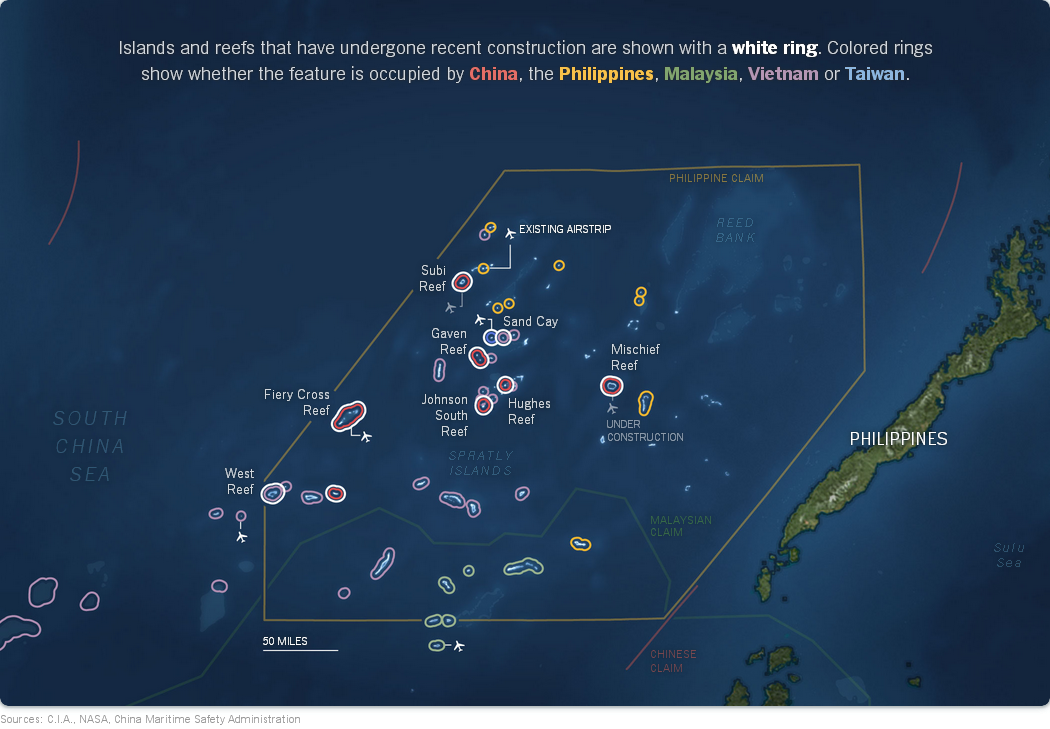 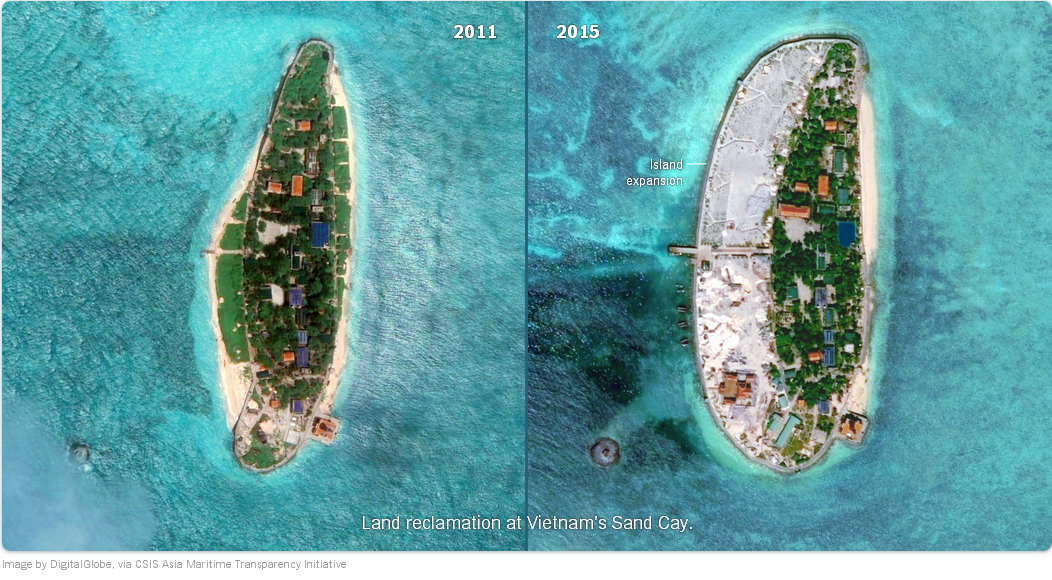 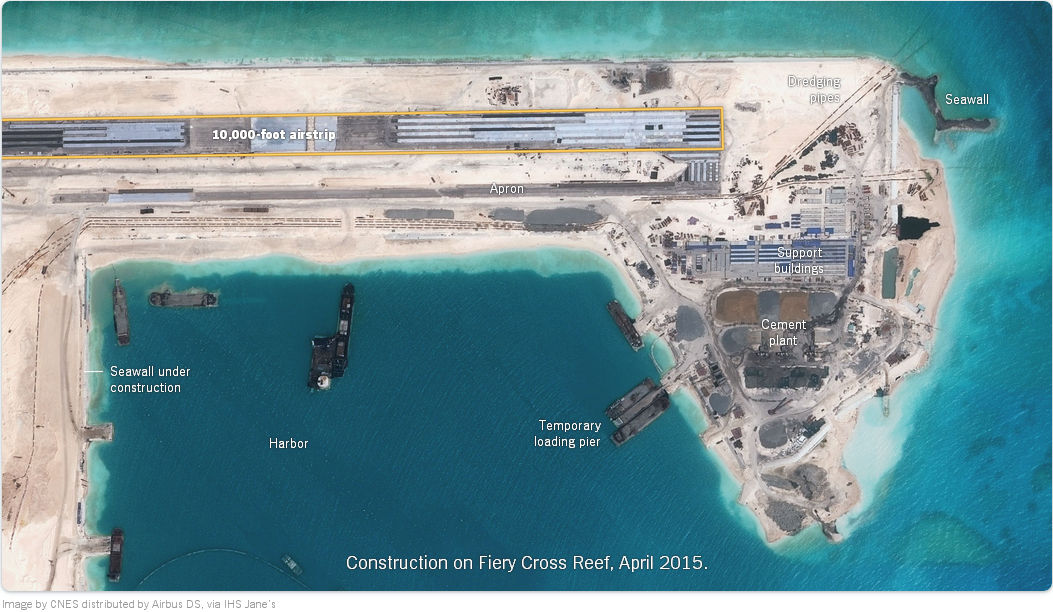 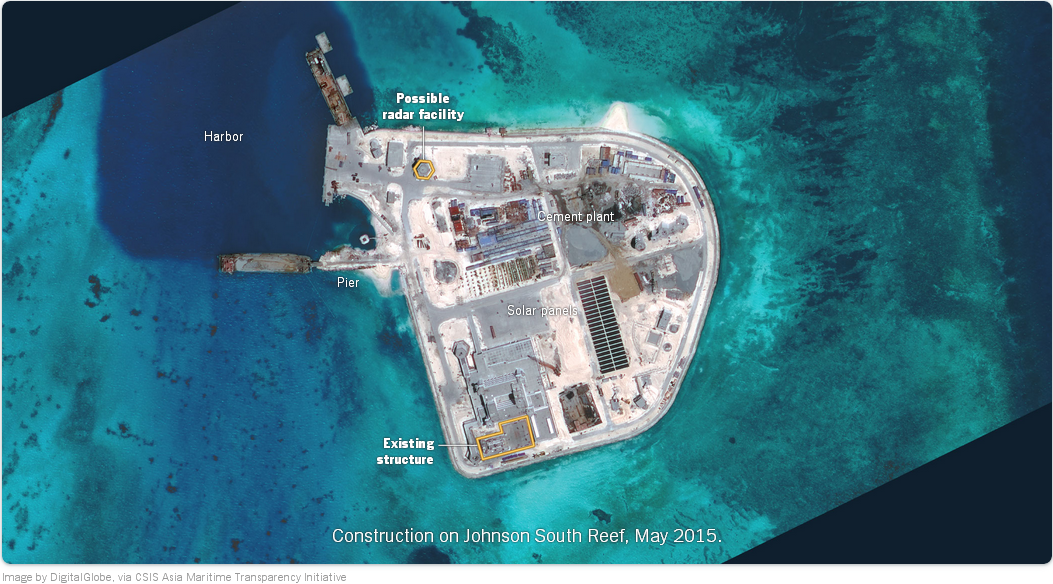 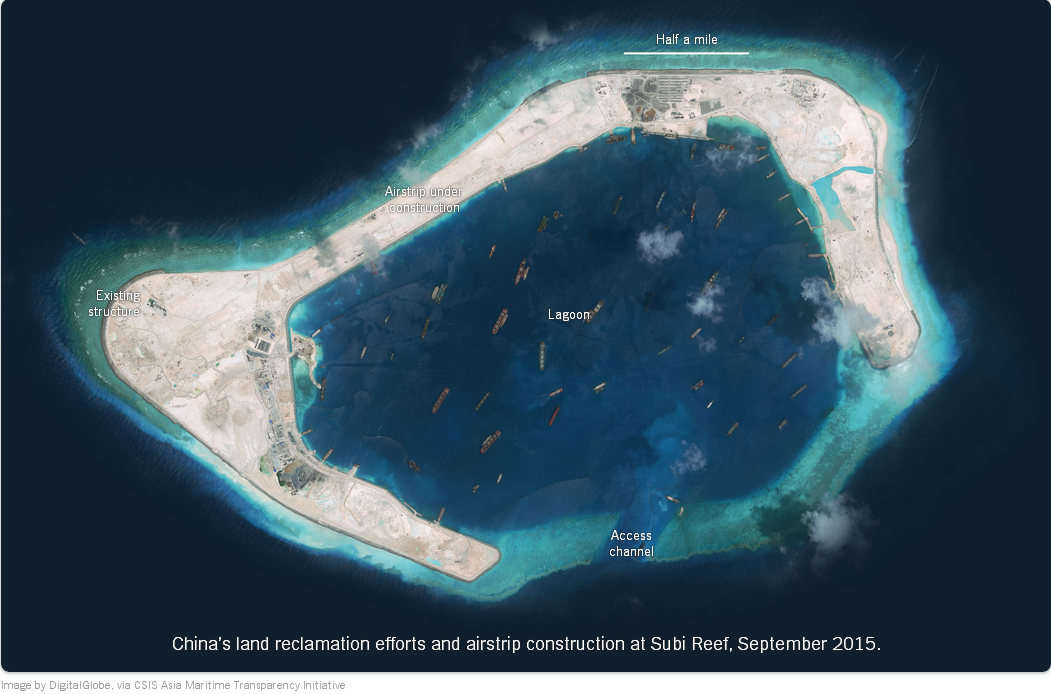 The speed and scale of China’s island-building spree have alarmed other countries with interests in the region. China announced in June that the creation of islands — moving sediment from the seafloor to a reef — would soon be completed. Since then, China has focused its efforts on construction. So far the country has built port facilities, military buildings and an airstrip on the islands, and recent imagery shows evidence of two more airstrips under construction. The installations bolster China’s foothold in the Spratly Islands, a disputed scattering of reefs and islands in the South China Sea more than 500 miles from the Chinese mainland.

China’s activity in the Spratlys is a major point of contention between China and the United States, and will be one of the primary topics of discussion between President Obama and President Xi Jinping of China during the president’s visit to the White House.

The new islands allow China to harness a portion of the sea for its own use that has been relatively out of reach until now. Although there are significant fisheries and possible large oil and gas reserves in the South China Sea, China’s efforts serve more to fortify its territorial claims than to help it extract natural resources, said Mira Rapp-Hooper, formerly the director of the Asia Maritime Transparency Initiative at the Center for Strategic and International Studies, a Washington research group.

Though too small to support large military units, the islands will enable sustained Chinese air and sea patrols of the area. The United States has reported spotting Chinese mobile artillery vehicles in the region, and the islands could allow China to exercise more control over fishing in the region.

Several reefs have been destroyed outright to serve as a foundation for new islands, and the process also causes extensive damage to the surrounding marine ecosystem. Frank Muller-Karger, professor of biological oceanography at the University of South Florida, said sediment “can wash back into the sea, forming plumes that can smother marine life and could be laced with heavy metals, oil and other chemicals from the ships and shore facilities being built.” Such plumes threaten the biologically diverse reefs throughout the Spratlys, which Dr. Muller-Karger said may have trouble surviving in sediment-laden water.

The Chinese were relative latecomers to island building in the Spratly archipelago, and “strategically speaking, China is feeling left out,” said Sean O’Connor, principal imagery analyst for IHS Jane’s. Still, China’s island building has far outpaced similar efforts in the area, unsettling the United States, which has about $1.2 trillion in bilateral trade go through the South China Sea every year. Defense Secretary Ashton B. Carter criticized China’s actions in the region in May, asserting that “The United States will fly, sail and operate wherever international law allows, as we do all around the world.” But on Sept. 17th, David Shear, the top Pentagon official in charge of Asia and the Pacific, told a congressional hearing that the last time the United States sent ships or aircraft within 12 nautical miles of the islands, the conventional limit for “territorial waters,” was in 2012.

Vietnam, Malaysia, the Philippines and Taiwan have all expanded islands in the Spratlys as well, but at nowhere near the same scale as China.

For China, the Fiery Cross Reef is the most strategically significant new island, with an airstrip that is long enough to allow China to land any plane, from fighter jets to large transport aircraft. But China’s airstrip is not the first in the region — every other country that occupies the Spratlys already operates one as well.

China’s reefs hosted smaller structures for years before the surge in construction. By preserving these initially isolated buildings, China can claim that it is merely expanding its earlier facilities, similar to what other countries have done elsewhere in the region.

In recent months, China has nearly completed two of its largest island building projects, at Mischief Reef and Subi Reef. Current imagery shows that China has likely started building airstrips on long, straight sections of each of those islands, which would give the country three airstrips in the area.

Posts from This Journal “Острова” Tag

Comments for this post were disabled by the author